The sun, westering imperceptibly earlier with each passing day, marks the crawl towards the last quarter of the year; on tiptoe towards autumn. And with it comes the tidings the brethren here have been waiting a long time for with a breath conservatively qualified bated: on the 23rd of August, RW the District Grand Master announced the reopening of Freemasons’ Hall for meetings and convocations from the 1st of September, albeit, with a rider   stipulating strict compliance with government  and UGLE guidelines.

What has ensued is a flurry of activity. The thick crust of mildew on the shoes, accumulated over three months of a nagging sodden monsoon, has been wiped off and the Oxfords and Derbys  burnished a refulgent veneer of black. The regulation neckties yanked off the racks and knots practised afresh. Those who have lost the touch settle for the elementary four-in-hand – the sprezzatura-inclined prefer its studied simplicity, though — in place of the more intricate Windsor.  The dimple is best left alone for a month or two more of practice, others have submitted resignedly. French cuffs have been accessorised and black trousers pressed to a razor edge crease. Waist buttons re-sewn on to accommodate half a year’s love-handles, to summon an Americanism. And finally, to complement the ensemble, the little blue books dusted of the gossamer meshes delicately woven by passionately tenacious  arachnids in these six long months. All of the above, in eager anticipation of the day of the meeting.

Not everyone, however, has been this enamoured; the more chary, the geriatric and those afflicted with refractory morbidities in particular, have expressed their disinclination to attend. In no uncertain terms. Almost a cataclasm, they fear, that threaten to rock the inertia and the sense of security that the long immurement has lulled them into. One hopes time will, sooner rather than later, wean them away from their not-altogether-unfounded misgivings.

And then, there is this third lot stealing wistful glances at their regalia, but whose  halves – better or otherwise remains, for ever, a matter of animated debate – have had the announcement blight the hope they had begun to entertain that their Mason-widow days might just have seen its end. As observed in these columns earlier, limbs stand in imminent peril of being fractured: the innocuousness of the humble rolling pin  belies a formidable punch. So, there you are, dear reader: as you are aware,  it takes all types to make a Mason.

The bustle has not been restricted to the brethren: the District has been busy procuring the thermal gun, fogging machine, pedal sanitizers and jars of antiseptic  hand-wash, imparting demonstrations to the staff on their uses, identifying areas to be sanitized, in addition to conducting cloud meetings with the Lodge secretaries on the dos and don’ts at the forthcoming meetings. Yours truly, as the secretary of Federation, was particularly circumspect, the Lodge being the first to hold a meeting at 19 after the six month hiatus. More on that, the meeting that is, in the following edition.

For now, other interesting events like the Independence Day celebrations  and the Masonic Fire Toast – a pledge hitherto unknown to Kathmandu and Federation, and, I dare say, to the other Lodges as well, the essence captured lucidly in Bro Anil Vaswani’s account — await us below. So, then, brethren …

A student of nephology would have termed it nimbostratus. Or, was it cirrocumulus? One alludes to the cloud canopy over Freemasons’ Hall and much of Park Street on the morning of Saturday, the 15th of August, that every proud Indian prefers calling  Independence Day.

A sharp shower earlier had swept the courtyard and  given it  a freshly scrubbed look. The sunshine, ephemeral, that followed the  precipitation brought cheer, if short-lived, to the cardiac recesses  of the  Masons present. They, the Masons, were from either side of the aisle, the English Constitution as well as its Indian counterpart. And as if to prove wrong the Thomases known for their sceptical proclivities, RW the District Grand Master drove in with five minutes to spare. Pleasantries traded, he, along with the Regional Grand Master of Eastern India,  RW Bro Ajit Kumar Shaha, and the Deputy District Grand Master, Bro Devdutta Basu, climbed up the spiral staircase at the back to the terraced roof, — where the pole stood with the flag coiled demurely around its heel — with  a gingerliness generally associated with men without insurance shields; rickety would be an exercise in understatement for the creaky cast-iron newel and winders that left one wondering if it were not the same seven-or-more erected by the trusted artisans of King Solomon in his famed temple in the third century preceding the year of Our Lord.

Bro Thapar rolled the halyard to hoist the tri-colour to full mast, the bunting initially wrapping itself coyly around the staff and then, on a gentle tug, unfurling to its full flaunting glory. Heralding the seventy fourth year of self-governance. The anthem that followed, a close approximation to its crisp 52-second playing time, brought the brethren to starchy attention and lumps in many a throat.

However, the delectable programmes presented every year in Northampton Hall by the little ones of Masonic Montessori School  were sorely missed, courtesy the scourge Beijing avers unabashedly it has had no hand in inflicting on an unsuspecting planet. The national airs, Bande Mataram, Sare Jahan se Achha and We Shall Overcome, followed once again by the anthem, this time reprised with accompaniment, that usually resonate across the commodious Hall, were conspicuous by their absence. Instead, the brethren were treated to shingara and laddu,  which, while delicious to the taste, saw the acid-reflux prone reach for pills known for their alkascent properties.

Bro Balbir Wasal, secretary, reported the commemoration by Lodge Pioneer at Asansol. The flag-hoisting and rendition of Jana Gana Mana were followed by snacks. In an eminently laudable gesture, the Lodge gave its caretaker a sum of Rs 2,500 to help him tide over the difficult times. The lodge intends helping him the next month as well. A consummate cook, he deserves every bit of the ministering, if to betoken the recognition for the gastronomic contentment of the brethren. 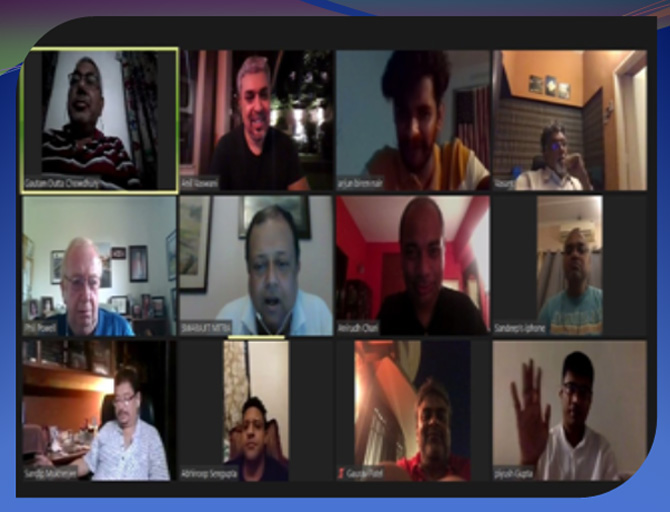 The Brethren of Lodge Kathmandu of Nepal charged their glasses and conducted their monthly online fellowship meeting on 2nd August 2020, with the Brethren of Federation Lodge following suit a few days later on 7th August. These two Lodges have been conducting online get-togethers every month since April 2020, just after the lockdown led to 19 Park Street being temporarily off-limits for Masonic meetings.

The August monthly meetings were made more interesting with the demonstration of the Masonic Fire toast to the Brethren. Although this is (lamentably) not a regular practice in Lodge meetings at 19PS, one hopes that demonstrations like these will “fire” our Brethren’s interest in learning more about their Masonic traditions while simultaneously making their Festive Boards more interesting. A brief history and usage of Masonic Fire has therefore been compiled below from various sources.

Masonic “Fire” appears to have been adapted from the military custom of firing guns or muskets after toasts. Bro Captain George Smith, Provincial Grand Master for Kent, supposedly introduced it into England in 1777 after his return from France. Based on French artillery tradition, the Festive Board was called “The Table Lodge” and used tables laid out in the shape of a large horseshoe, with Brethren sitting around the outside and Wardens at the ends.

As soon as the feast started, plates became “tiles”, spoons became “trowels”, glasses were “cannon” and wine was “powder”. To fill the glass was to “charge the cannon” and to drink the contents was to “fire” it. After proposing a toast to the health of the Brethren, the “cannon” which had already been “charged” with “powder” was fired at a given signal. The proof that they had been properly “fired” or emptied was given by certain simultaneous movements of the hands.

Only the hand movements of the ritual were eventually adopted in England, for which “firing glasses“with a heavy base were necessary. After “firing” i.e. draining the glass, the Brethren were called upon to copy the WM who made certain movements to show that the “cannon” had been well and truly fired and emptied. Holding the cannon, the WM jerked his hand to the full length of his arm, swung it to the left and then to the right. He did this three times while counting, and at the word “three” banged his cannon on the table. The health of the Brethren was then further honoured by “three times three” claps on the hands.

Banging down goblets with heavy bases on the table was once a common practice in Masonic “fire”. However, heavy firing glasses are hardly seen nowadays, and the “fire” is now usually accompanied by Brethren clapping their hands instead.

There is an enormous variety in the different versions of “Fire” practiced in present-day English Freemasonry. All of them follow a variation on the basic theme of “point-left-right” (PLR) followed by the “three times three” hand clapping. A typical “fire” procedure is PLR, PLR, PLR, one (point to the left), two (point to the right), one clap, short pause and three short claps followed by another set of three short claps.

Various theories have been proposed for the origin of the PLR, such as making the sign of the cross in benediction over food or drink, the “Hammer of Thor” sign used in Scandinavia in olden times, the motions made by a bricklayer when lifting cement with his trowel, or a royal salute of 21 guns. We shall never really know, of course, but like many other things in Masonry, this only adds to the charm and mystique of the tradition.