Brethren,  this periodical is meant to be a flashback on events ultimo. However,  “a loss so important as that of” two dear brothers in quick succession cannot await mention for a month. The central volet in the triptych of Amits has fallen; Bro Amit Gooptu is no more. And just a week after departed Bro Dr Himadri Sengupta. Bro Amit Ukil laments, “It is very hard to believe that one among the trio of Amits with allegiance to 19 PS is no more with us. It was just this February that we had a memorable time at the District  Meeting in Kanpur. Amit Gooptu was a jovial, well-meaning and mannered brother who loved to be involved in all good things. As one of the Amits, I  shall miss him immensely. Another good friend and Brother who left suddenly was Dr Himadri Sengupta. My association with him extended beyond the times and boundaries of the lodge. He was a family friend and surgeon who had given us advice on many occasions. He was as much philosophical as he was charitable, with ideals rarely found these days. Rest in peace, Brothers Amit and Himadri.” And may the Almighty grant fortitude to their dear ones in this their dark hour.

Heralding a breath of fresh air amidst this  pall of sepulchral gloom, it is, indeed, heartening to learn that  THE 19 has stirred an interest in a section of the readers. More than the contents, it is the style of writing that appears to  have turned into a subject of animated parley. A wide spectrum, ranging from a disdainful “gibberish” at the one end to an effusive “impeccable” at the other, with a via media soliciting the District Grand Master’s considered opinion on the matter. The DGM, for his part, resorting to a diplomacy that bordered on glorious equivocality, counselled “reader-friendly text”. The editor, without wasting column-inches on his own views, is inclined to concur with one repartee: “It’s a newsletter. If DGL wishes to send out correspondence, clear mails should be circulated. But a newsletter has to have flair and wit. Else, it’s just a circular.” To the contention about “big words and difficult sentences”,  the riposte continues, “most Masonic language is arcane,” and goes on to point to “the connect with old school English as it is more fitting with the context.” In fine, gentlemen, this newsletter has no intention of turning into a  circular. Or, for the matter of that,  another minutes-book.

Then, did the District Grand Secretary give all an almighty scare! He developed a tussis – cough, a physician would hasten to elucidate to a layman at a nonplus — and the mercury shot  well beyond the threshold  98.4. RW the District Grand Master  declared 19 out of bounds. Forthwith. The redeeming feature: he did not display anosmic proclivities. The reference, dear reader, is to the DGS, not the DGM. Almost rivalling  the legendary olfactory prowess of elephants, — with probosces for snouts, the pachyderms evidently have a distinct edge in the faunal world — Bro Singh could tell the  bouquet of whisky a mile away. The doctor, matching the DGM’s promptitude, declared: not COVID.  And sure enough, the District office returned to the “new normal”, to summon a fast-clichéd neologism, of Tuesdays and Thursdays before long. Hallelujah!

With July turning into yet another fallow month, — the burgeoning afflictions augur ill for the remainder of the year,  if at the cost of sounding Jeremiahesque — one settles down to savour the odyssey of Lodge Kathmandu of Nepal from the snow-clad reaches of the Himalayan kingdom to the hallowed portals of the Hall. Under Bro Anil Vaswani’s fluent penmanship – his punmanship is just as adroit — the account reads every bit the  adventure it had then been. Strap up then, brethren, and read on.

Lodge Prinsep  had a virtual get-together on the 19th of July. The members exchanged their views on the present pandemic situation. Everyone emphasised the imperative to take care of themselves and their families in these difficult times. Various other things were discussed among the members and all seemed keen to meet physically at the Lodge Meetings once normalcy prevails, informs the IPM, Bro G N Singh.

Lodge True Freemasonry had one a week later, on the 25th of  July.  Among other things, the members resolved to take care of a Brother’s subscriptions for two years, considering the financial distress he has been undergoing. Charity begins at home, the Secretary, Bro Kaushik Mukhrejee, explains.

PHOENIX FROM THE ASHES
The Story of How A Lodge Moved Across Borders To Stay Alive
By Anil Vaswani, PM, Lodge Kathmandu of Nepal 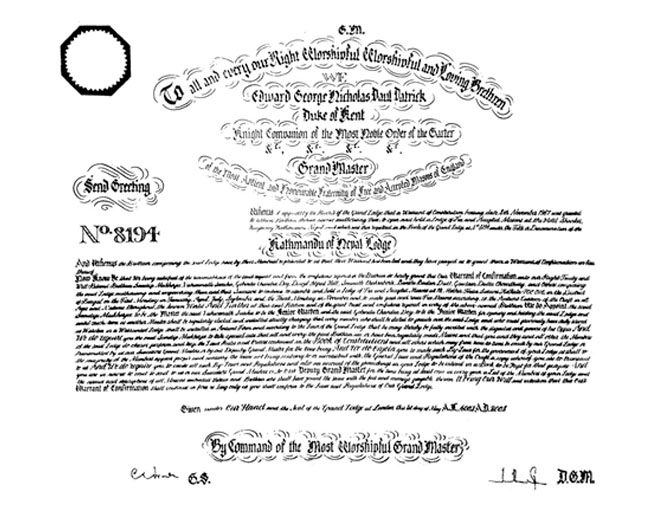 This is the brief history of how Lodge Kathmandu of Nepal No 8194 E.C. was moved from Kathmandu to Kolkata in order to keep it alive and functioning in the District Grand Lodge of Bengal. Many brethren worked hard behind the scenes to make this happen. The following has been transcribed from the story as related by Bro. Gautam Dutta Chowdhury, one of those who played a key role in this event. The story goes thus: “I had been posted in Kathmandu to sell Yamaha motorcycles. After my training I flew from Delhi to Kathmandu (just a month before the flight from Kathmandu to Delhi was hijacked and taken to Kandahar in December 1999).” “In August 2000 our then DGM RW.Bro. Iqbal Ahmed visited Kathmandu to revive Lodge Kathmandu which was nearly defunct as members fell short and only 4 to 5 brethren were left. We were meeting at Summit Hotel in those days, instead of Shankar Hotel where they used to meet earlier. In attendance were : RW.Bro. Iqbal Ahmed, W.Bro. G. N. Rimal, W.Bro. B. Ghosh, W. Bro. S. C. Mehta, W.Bro. Raj Kumar Ladsaria (the Lodge Secretary at that time), Bro. V. N. Surana, W.Bro. Ashok Ladsaria and myself.” “We decided to hold regular meetings to revive the Lodge, and I was assigned to bring in new members. W.Bro. Raj Kumar Ladsaria was enthusiastic and had planned to bring in a few local members as well. Unfortunately he was suddenly called to the Grand Lodge above in September 2000. With his passing away, the meetings were again abandoned, as he was the key person behind the revival at that time.” “I returned to Kolkata in 2005. In 2006 the DGM asked me if I could visit Kathmandu and bring the Lodge down to Kolkata. I accepted the challenge and went to Kathmandu. I met Mrs. Ladsaria to enquire about the Lodge materials (as W. Bro. Ladsaria had them all in his safekeeping) and learnt that they were kept in a godown. I then approached the godown owner who was very courteous. Unfortunately he had cleaned up the place some time back so I could not find any items pertaining to the Lodge. The missing items included not just the Charter and banner of the Lodge, but also some impressive oil paintings. “I learnt from Mrs. Ladsaria that some materials were also kept with their daughter who stayed in Kathmandu with her family. I reached her place and found two cupboards full of Lodge materials, including the s___ (used in the Third Degree ritual) and some Chapter materials as well. As rent was due to her for storage, I decided to take possession of the materials and gifted them the two cupboards in lieu of the rent due.” “In the meantime I met Bro. Surana, Bro. Rimal and Bro. Ghosh. The latter worked for a subsidiary of Surya Nepal, the largest manufacturer of cigarettes in Nepal, so I approached him to arrange some cartons to pack the items and also requested him to have them sent to 19 Park Street. There were also some funds left in the Lodge account, which could not be brought to Kolkata. I requested Bro. Ghosh to use these to pay for transportation of the Lodge materials to Kolkata, and then use any remaining funds to buy blankets to distribute among the poor. A day later I packed all items, taking special care to conceal the s___ as there was no document to show from where it had been obtained.” “The Lodge was regularised in the following manner. A meeting was held at Star International (my office during my last days in Kathmandu) on 19th September 2006, attended by W.Bro. Rimal as Master, W.Bro. S. C. Mehta, W.Bro. B. Ghosh, RW.Bro. Iqbal Ahmed, W. Bro. Denzil Hilt, Bro. V. N. Surana and myself(I was a joining member of the Lodge in Kathmandu). W.Bro. Ghosh raised a motion to transfer the lodge to Kolkata, which was seconded by me and was passed unanimously.” “The very first meeting of Lodge Kathmandu in Kolkata was held on 20th April 2007, attended by W. Bro. Denzil Hilt as Master and W.Bro. B. B. Dutt as IPM. Others present were RW.Bro. Iqbal Ahmed, W.Bro. Sandip Mukherjee, W.Bro. Hoshang Munshi, W. Bro. Gobinda Dey and myself. The following meetings were on 6th June 2007 where W.Bro. B. B. Dutt was proposed as a joining member, and then on 19th September 2007 where Mr. Somnath Chakraborty was proposed as a candidate. He was also the first member to be initiated in Kolkata when the Lodge met on 28th November 2007.” “And finally followed the Installation meeting, at which I was asked if I wanted to take the Chair, but declined. W.Bro Sandip Mukherjee gave his consent, and on 7th Feb 2008 he was installed as Worshipful Master of Lodge Kathmandu in Kolkata.” Author’s Note – From a small and struggling Lodge in Nepal with barely enough brethren to constitute quorum for a meeting, Lodge Kathmandu today has 28 brethren and is growing and thriving in its new home in Kolkata. The brethren would like to acknowledge a deep debt of gratitude to all the senior Masons who persevered and succeeded in their efforts to save this Lodge. If we are reaping a bountiful harvest today, it is due to the seeds sown by these dedicated brethren 14 years ago. Truly, as they say, our cup runneth over, and may the GAOTU continue to shine his light upon the District and the Lodge for many more years to come.